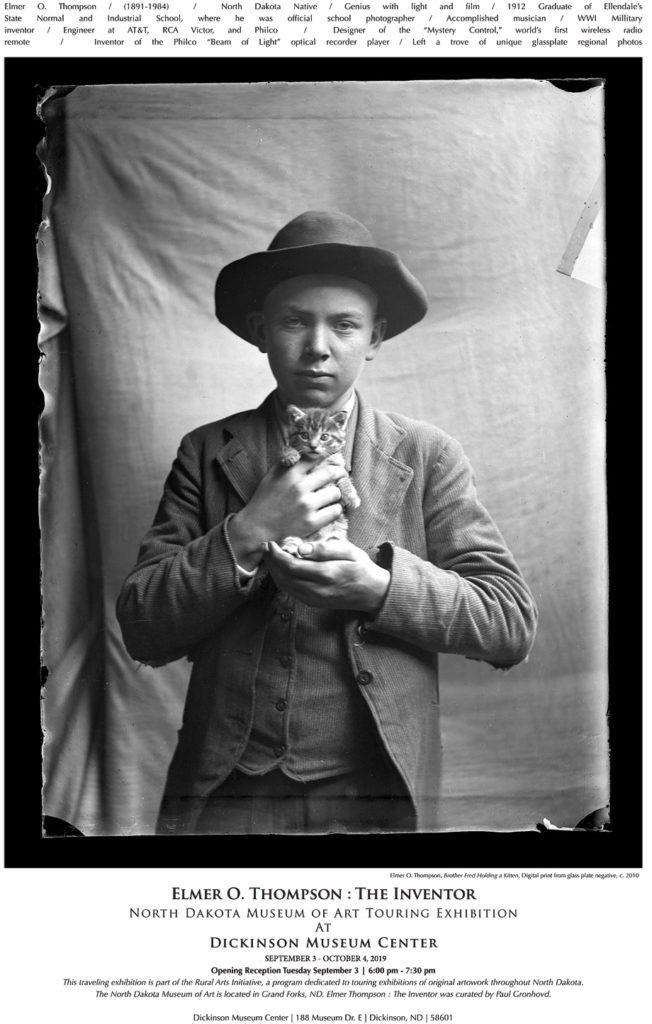 The North Dakota Museum of Art, in collaboration with the Dickinson Museum Center, is pleased to announce the opening of Elmer Thompson: The Inventor on September 3rd 2019. There will be a FREE opening reception on September 3rd from 6:00 – 7:30 pm in the Joachim Regional Museum. The exhibition was organized by the North Dakota Museum of Art and is touring the State through the Museum’s Rural Arts Initiative program.

The exhibition will be on display until October 4th, 2019 and is included with paid admission to the Dickinson Museum Center.

Growing up on a farm in rural North Dakota, Elmer O. Thompson (1891-1984) developed his creative impulses with photography, educating himself in matters of staging, lighting, and processing. Mr. Thompson quickly became an expert in the use of his 5 x 7 camera. His early photographs show the development of a talent that would lead him first to the State Normal and Industrial School in Ellendale, where he served as the official school photographer. He went on to earn an electrical engineering degree at the University of California, served in the Signal Corps in Paris in WWI, and then moved to the center of technological innovation in New York City.

Mr. Thompson earned the first six of his ultimate thirty patents at the AT&T Headquarters at 195 Broadway. From there he moved to RCA Victor, then spent several decades at Philco, where he earned two dozen more patents, including the first wireless radio remote control (Philco’s “Mystery Control”) and a phonograph that transferred the signal from record to the amplifier by means of an optical sensor (the “Beam of Light” system).

Mr. Thompson’s progress—from the prairies of North Dakota to the technological heartland of the early radio and television age—illustrates the marriage of artistic elements with technological innovation. This exhibition illustrates that career with large framed prints of his photographs, many of which were taken in and around Ellendale and near his home in Cavalier County. These include individual portraits, landscapes, buildings, and staged trick photographs.

The North Dakota Museum of Art is the State’s official art museum. As it is located in Grand Forks, it can be difficult for schools to plan day-trips to the Museum. Due to the great distances some schools face, the Museum began bringing exhibitions to towns throughout the State. Exhibitions have been installed in all corners of North Dakota, including smaller towns such as Crosby, Pekin, and Bowman, and larger cities such as Jamestown, Fargo, and Bismarck. Through this program the Museum delivers and installs exhibitions of original artwork free-of-charge to North Dakota communities who are interested. In addition to touring exhibitions, the Museum’s Education Department creates lesson plans and makes them available on the Museum’s website at www.ndmoa.com

Your ticket for the: Elmer Thompson: The Inventor To Open at Dickinson Museum Center