July 10th, 2020: New research from a team led by Badlands Dinosaur Museum’s Dr. Denver Fowler describes Trierarchuncus prairiensis, a new species of the bizarre hook-handed alvarezsaurid dinosaurs, which lived at the end of the time of the dinosaurs, immediately before the K-Pg mass extinction 66 million years ago.

The alvarezsaurids were a very strange group of small theropod dinosaurs, characterized by a seemingly bizarre set of features including very long legs, a long snout filled with tiny teeth, a body covered in sleek primitive feathers, and their most famous feature: a huge thumb claw at the end of extremely short but powerful arms.

The first well-known alvarezsaurid was described in 1993 from a skeleton found in upper Cretaceous rocks of Mongolia. Its name, Mononykus, means “one claw” as at the time it was thought that it had a single enormous claw on the hand.

Since the discovery of Mononykus, many other alvarezsaurid species have been named, almost all from Asia or South America. Alvarezsaurid remains are extremely rare in North America with just a few tantalizing fragments known from Alberta and Montana. This has meant that alvarezsaurids are typically overlooked when considering the otherwise well-known dinosaur ecosystems of North America: it probably comes as a surprise to some people to learn that these strange-looking fluffy insectivores would have been scurrying around the feet of Tyrannosaurus and Triceratops!

Although fragmentary, the new fossils include three hand claws which are of different sizes. It is proposed that these represent a growth series from juvenile to adult. This is important as it is recognized that dinosaurs changed in shape, often significantly, as they grew. Indeed, the new fossils show that as Trierarchuncus grew its hand claw became more robust; blood vessel grooves on the sides of the claw became more deeply embedded in bone; and the claw surface developed from being smooth in young individuals, into a rough surface texture in adults.

Change through growth is significant as some previously named species of alvarezsaurids were described based on fossils that were small and probably pertained to young individuals. The new findings suggest that some of the supposedly unique features of these previously named species may in fact be due to their immature condition, rather than representing defining characteristics of a species.

The new fossils were collected from the Hell Creek Formation of Montana, which was deposited between 67 and 66 million years ago. This places Trierarchuncus as the final known representative of the alvarezsaurid family, and it was among the last of the (non-bird) dinosaurs before they went extinct 66 million years ago at the K-Pg boundary mass extinction.

About the researcher(s)
Dr. Denver Fowler is curator of Badlands Dinosaur Museum, Dickinson Museum Center, Dickinson ND.
Jack Wilson is a paleontologist from San Diego, CA.
Dr. Elizabeth Freedman Fowler is Assistant Professor of Biology at Dickinson State University, ND.
Dr. Chris Noto is a Professor at the University of Wisconsin-Parkside.
Daniel Anduza is a paleontologist from San Francisco, CA.
Dr. John R. Horner was the Ph.D. supervisor of Dr.s Fowler and Fowler Freedman and is a professor at Chapman University, CA.

What does the new name mean?
Trierarchuncus refers to the 'trierarch', a seafaring ship's captain (Greek), and 'uncus' meaning hook (Latin), which combined form “Captain Hook” in reference to the hook-handed pirate from Peter Pan.

The species name prairiensis means 'of the prairie', referring to the gentle plains of eastern Montana (in particular the American Prairie Reserve) where the new material was discovered.

The combination therefore means “Captain Hook of the Prairie”.

About the model and artist
The life-size model of Trierarchuncus was created by Boban Filipović, a paleontologist and artist from Serbia. The model won the Lanzendorf / National Geographic paleoart prize (sculpture category) at the 2018 Annual Meeting of the Society of Vertebrate Paleontology. It is on permanent display at Badlands Dinosaur Museum, Dickinson Museum Center, Dickinson, North Dakota. It was conceived as “your weird little buddy” and specifically designed to make eye contact with museum visitors.

More images of the Trierarchuncus model (including photos taken during its construction) can be found in this album on Boban Filipović’s Facebook page. Many more images of his other models can be seen here.

Where are the specimens from?
All specimens were collected from BLM-administered public lands in Montana and are permanently stored in federal repositories. The holotype claw MOR 6622 is stored at the Museum of the Rockies, Bozeman, Montana, along with referred material MOR 2920 (metatarsal) and 3098 (smallest claw). Referred material, BDM 002 (claw) and 003 (radius), are stored at Badlands Dinosaur Museum, Dickinson Museum Center, Dickinson, North Dakota.

As of July 10th, the new paper is currently only available as an early-view unformatted accepted manuscript on the Cretaceous Research website. 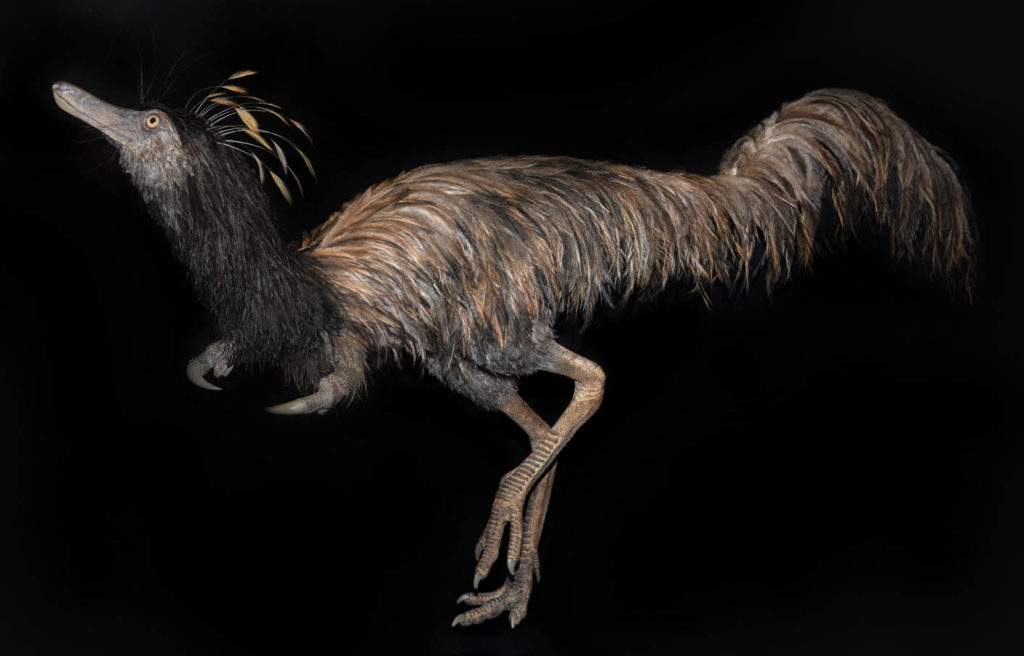 This life-size model of Trierarchuncus prairiensis was sculpted by Boban Filipovic and is on display at Badlands Dinosaur Museum, Dickinson, ND. 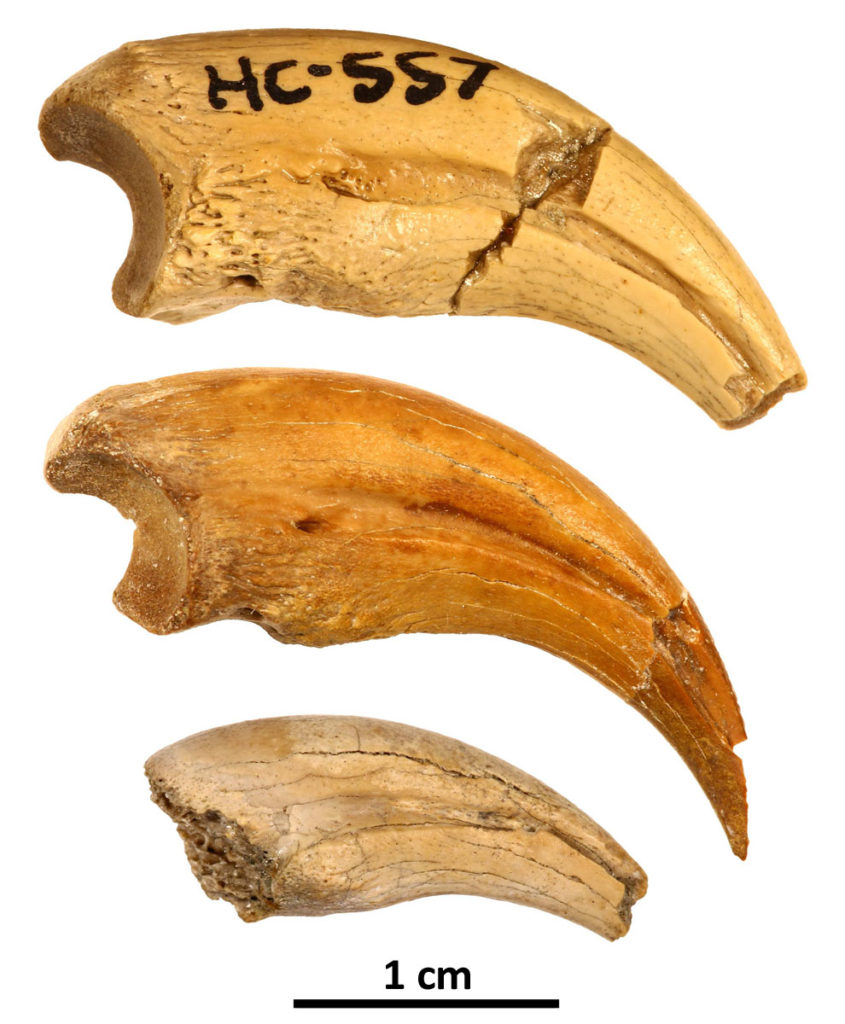 The three claws described in the study form an ontogenetic series showing changes in shape and texture as the animal grew in size. 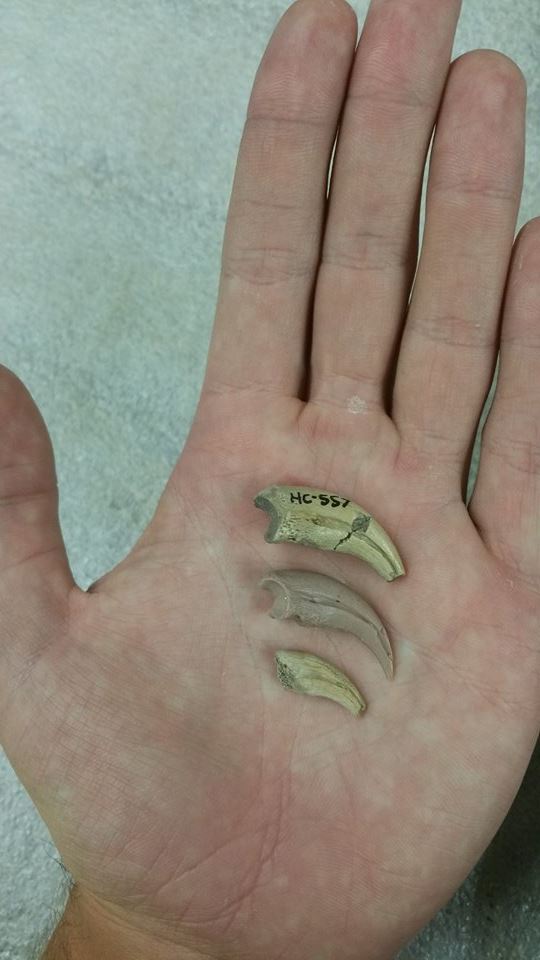 The three claws with a hand for scale. 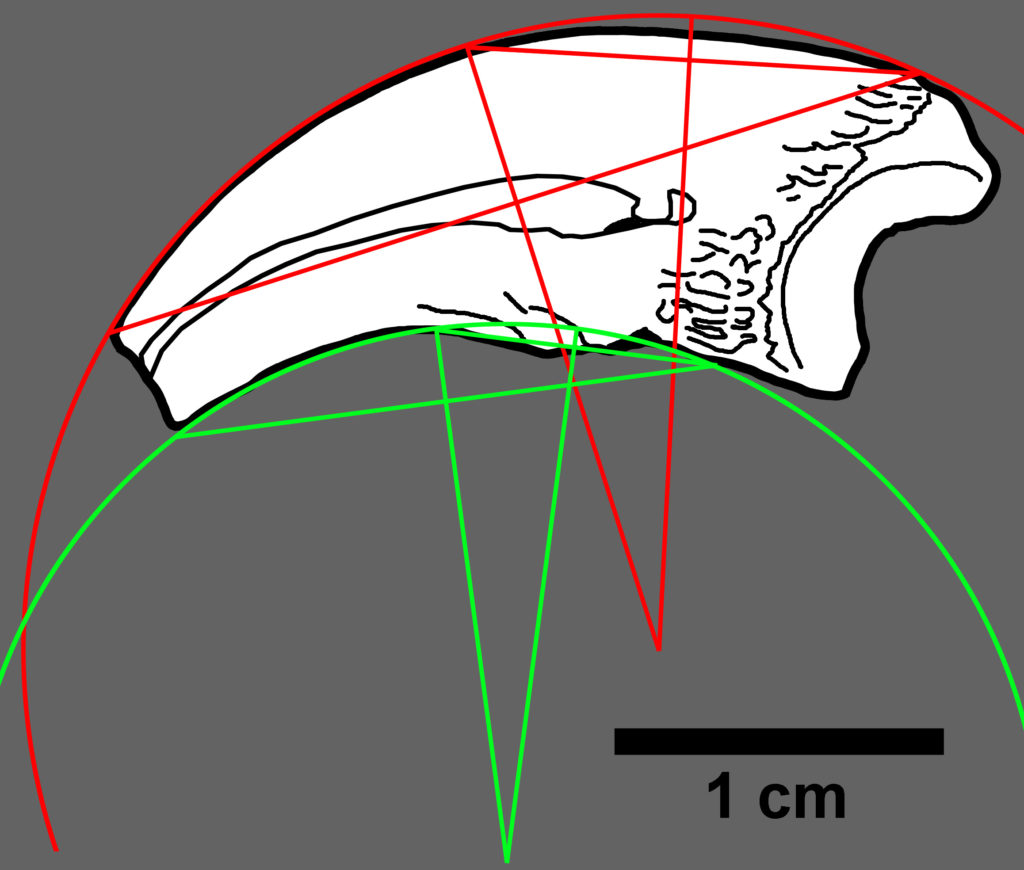 One of the new claws is almost complete, and shows that alvarezsaurid thumb claws were more curved than previously assumed.

All of the specimens were collected from the prairie badlands of eastern Montana, USA.

Your ticket for the: Badlands – Research – 2020 new alvarezsaurid species