The Ceratopsidae (horned dinosaurs) include well-known species like Triceratops and Styracosaurus from the Late Cretaceous Period of North America.  They are famous for their extravagant skulls, sporting huge horns and a lavishly decorated bony frill extending out from the back of the head. Scientists use differences in the shape and size of these adornments to tell apart one species from another.

New research by Denver Fowler and Elizabeth Freedman Fowler focuses on relatives of the New Mexico ceratopsid Pentaceratops (“five horned face”), which has a distinctive deep notch or “embayment” on the back border of the frill, and a pair of spikes at the center of the frill that turn outwards like the wings of a butterfly. A 1998 hypothesis had suggested that Pentaceratops (which lived 75.3 million years ago, Late Cretaceous Period), might have been the ancestor of the Canadian ceratopsid Anchiceratops (~71.5 million years ago). Both species had a pair of outwardly turned spikes in the center of the frill, but Anchiceratops seemed to have no notch in its frill, so the hypothesis was mostly forgotten.

In their new paper, Fowler and Freedman Fowler recognized that a skull attributed to Pentaceratops in 1981 was in fact subtly different, with a deeper notch in the frill. Furthermore, two new skulls found in rocks intermediate in age between Pentaceratops and Anchiceratops were also intermediate in shape, showing how the notch in the frill became even deeper through time and eventually closed in on itself, explaining the lack of a notch in Anchiceratops. The two intermediate skulls were named as new dinosaur species, Navajoceratops sullivani and Terminocavus sealeyi, and they form important links in a ~5 million year lineage stretching from Utahceratops through Pentaceratops, to Anchiceratops.

When the relationships of the new specimens were analyzed alongside data from other species, they revealed a splitting event deep in the evolutionary history of long-frilled ceratopsids (chasmosaurines), after which a Pentaceratops lineage evolved a progressively deepening notch in the frill, contrasting against its sister group, the Chasmosaurus lineage, which evolved a progressively shallower notch.

The origin of this evolutionary split occurred during the Late Cretaceous Period, when a vast interior seaway flooded the lowlands of North America dividing it into eastern and western subcontinents. A short period of especially high sea level ~85-83 million years ago brought the edge of the sea very close to the young Rocky Mountains. For hundreds of miles across what is now central Utah to southern Alberta, the coastal plain would have been as little as 5–10 km wide, providing very little habitat for dinosaurs. This would have effectively cut off northern and southern populations, which then probably evolved in isolation into two distinct lineages. However, after 83 million years ago, the sea receded from the mountain front, permitting the southern "Pentaceratops" lineage to migrate north, and vice-versa.

What do the new names mean?

Navajoceratops sullivani:
"Navajo horned face", after the Native American Navajo people who live in this area, and Dr. Robert Sullivan who led the expedition which found the holotype specimen.

Terminocavus sealeyi:
“Closing cavity” after the nearly closed notch in the frill, and after Paul Sealey who found the holotype specimen.

Dr. Robert M. Sullivan is a paleontologist who specializes on lizards and dinosaurs. He spent 20 years as curator of paleontology at the State Museum of Pennsylvania, during which time he led many expeditions to the badlands of the San Juan Basin in New Mexico, including the expedition that discovered Navajoceratops. He has now retired to Albuquerque and is a Research Associate at the New Mexico Museum of Natural History & Science.

Paul Sealey has collected dinosaurs and other fossils in the San Juan Basin of New Mexico for over 20 years. In addition to finding Terminocavus, a selection of Paul’s many other important discoveries can be seen in the exhibit halls of New Mexico Museum of Natural History & Science, Albuquerque.

About the artists
Color reconstructions by Ville Sinkkonen, a paleoartist from Finland, working in both traditional and digital media, 2D and sculpture. More examples of his work can be seen on his Twitter account, and on his artstation page. 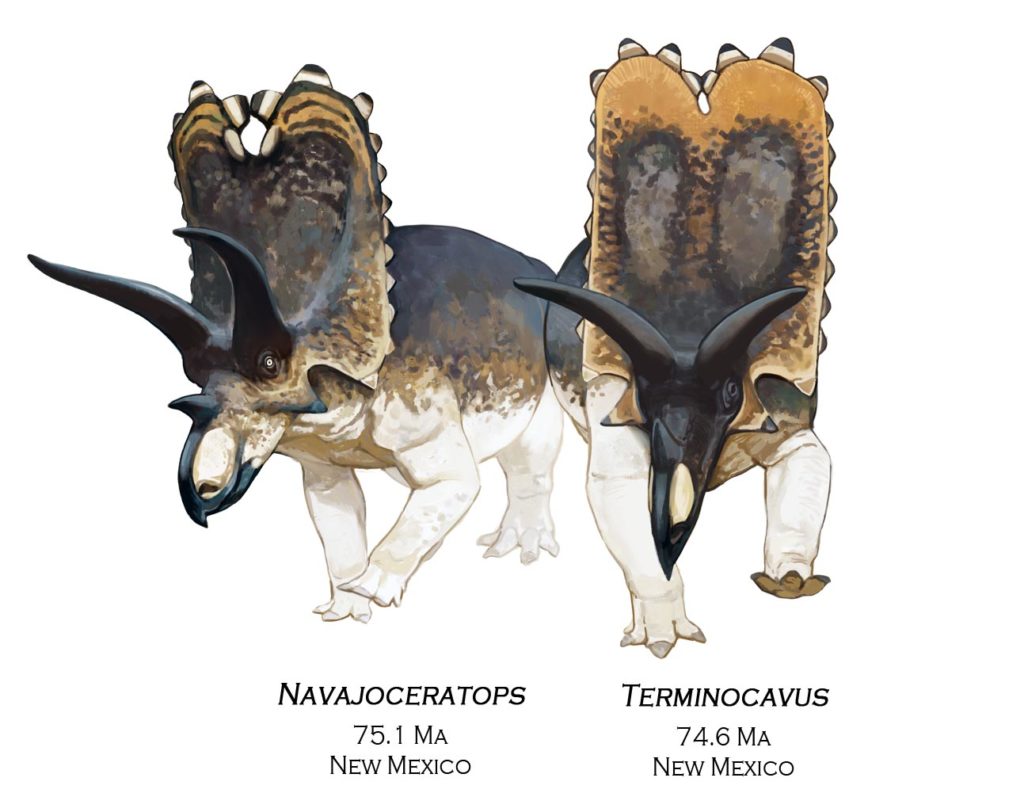 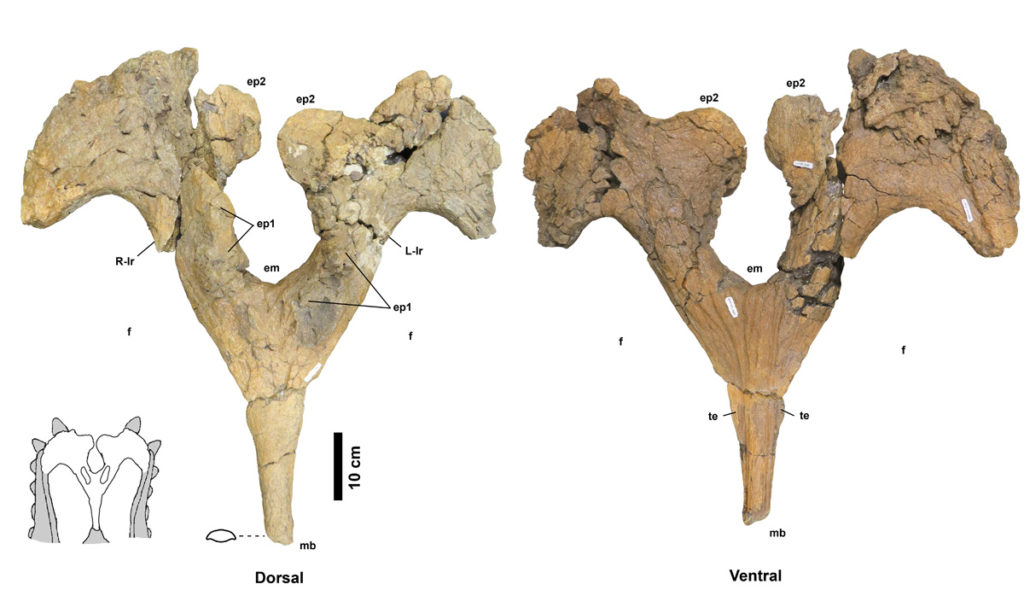 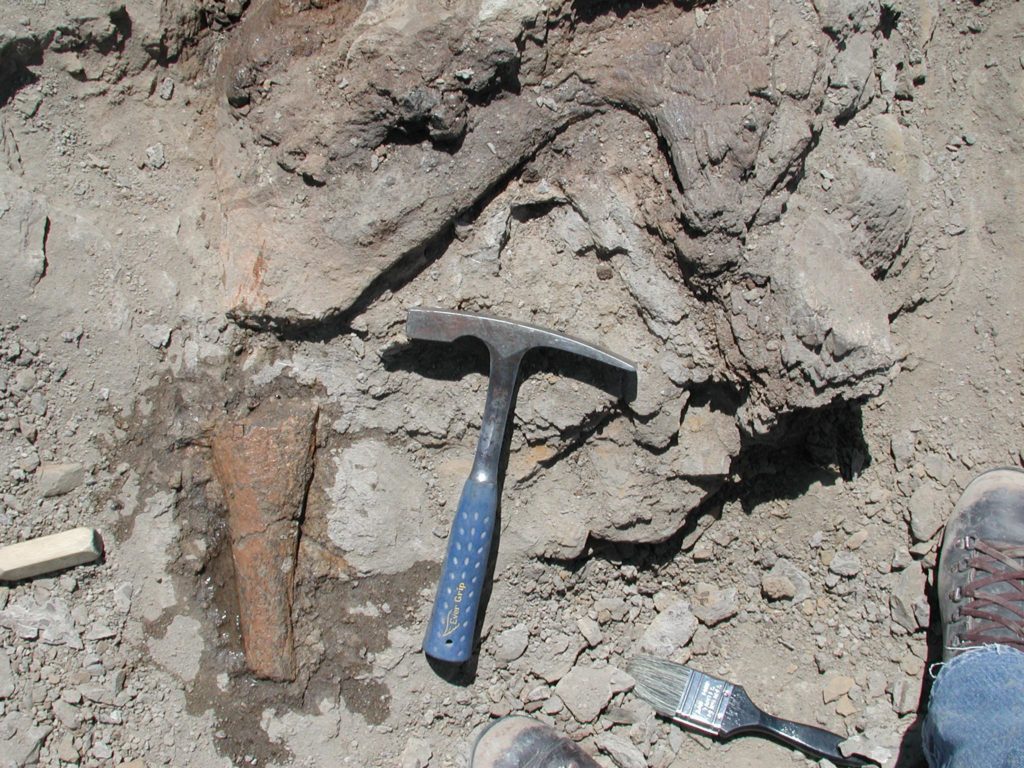 The parietal frill of Navajoceratops as originally found in new Mexico.

Arjan Boere and Denver Fowler stand over part of the frill of Navajoceratops. 2002 Photo by R Sullivan.

Your ticket for the: Badlands – Research – 2020 new ceratopsid species