New species of tyrannosaur hints at ancestor of T. rex

Background
Tyrannosaurids, the family of dinosaurs that includes T. rex, have been known from North America and Asia for over a century, yet many details of their evolutionary history remain unclear. Since the 1990s, debate has surrounded Daspletosaurus, a large tyrannosaurid known from Montana and Alberta, which has been proposed to be an ancestor of T. rex itself. Reconstructing the evolutionary relationships of Daspletosaurus has been hampered by the rarity of good specimens, and many researchers disagree as to whether these tyrannosaurids represent a single lineage evolving in place, or several closely related species that do not descend from one another.

New species
In research published today, Elías Warshaw and Denver Fowler report the discovery of a new species of Daspletosaurus from Montana: Daspletosaurus wilsoni, found in rocks intermediate in age between other tyrannosaurs found in the region. The new species displays a mix of features found in more primitive tyrannosaurs from older rocks, like a prominent set of horns around the eye, as well as features otherwise known from later members of this group (including T. rex), like a tall eye socket and expanded air-pockets in the skull. In this way, D. wilsoni is a "half way point" or  “missing link” between older and younger tyrannosaur species.

These findings suggest that previous research was correct in identifying several species of Daspletosaurus as a single evolving lineage, and supports the descent of T. rex from this group.

What does this tell us about dinosaur evolution?
In the Late Cretaceous of North America, many dinosaur families are represented by multiple closely-related species. These were previously thought to represent diversity, ie. that they lived at the same time, which would be evidence of branching evolution.  However, a wealth of new specimens and a better understanding of their placement in time has changed what we think. We can now see that many of these species are actually very finely separated in time from each other, forming consecutive ladder-like steps in a single evolutionary lineage where one ancestral species evolves directly into a descendant species. This is called the "anagenesis" mode of evolution, and is contrasted with "cladogenesis", where successive branching events produce many species that are closely related and therefore look similar to each other, but represent evolutionary “cousins” rather than ancestors and descendants.

The new study supports the addition of tyrannosaurs to a growing list of dinosaurs (including horned and duckbilled dinosaurs) for which anagenesis (linear evolution) has been proposed. This seems to suggest that linear evolution is more widespread in dinosaurs, with branching evolution being less frequent than previously thought.

More detailed research into the link between T. rex and Daspletosaurus is currently being conducted by Elías Warshaw.

Discovery in the badlands
The new species is based on a skull and partial skeleton (BDM 107) recovered by Badlands Dinosaur Museum from 2017-2021. The original discovery was made in 2017 by crewmember Jack Wilson who spotted a small flat piece of bone projecting out from the bottom of a towering cliff! This distinctive flat bone was the middle part of the nostril of a tyrannosaur. Careful digging around the bone revealed a complete premaxilla - the bone at the tip of the snout. A few broken vertebrae from around the site showed that this was a large tyrannosaur, but there was ~25ft (8m) of rock overlying the bones. Field crews in 2020 and 2021 used a jackhammer to dig down to the bone layer whereupon we discovered a partial skull and skeleton. The seemingly endless task of removing overburden gave rise to the specimen's nickname "Sisyphus", after the figure from Greek mythology.

2017 turned out to be a bumper year for Badlands Dinosaur Museum as Dr. Denver Fowler and Jack Wilson found four tyrannosaur sites in the local area. These have been successively excavated from 2017-2022 revealing three partial skeletons and what appears to be a mostly complete articulated skeleton.

Where are the specimens from?
The holotype specimen (BDM 107) was collected from exposures of the Judith River Formation in Valley County, north east Montana.
All specimens were collected under permit from public lands administered by the US Bureau of Land Management, and are permanently stored at the federal repository at Badlands Dinosaur Museum, Dickinson, North Dakota.

About the artists
Head reconstruction by Andrey Atuchin, a Russian paleoartist working in Canada. More examples of his work can be seen on his Deviantart page.

Group of tyrannosaurs by Rudolf Hima, an Indonesian illustrator and paleoartist who creates 2D digital illustrations using photoshop. More examples of his work can be seen on his Instagram page or his Twitter account. 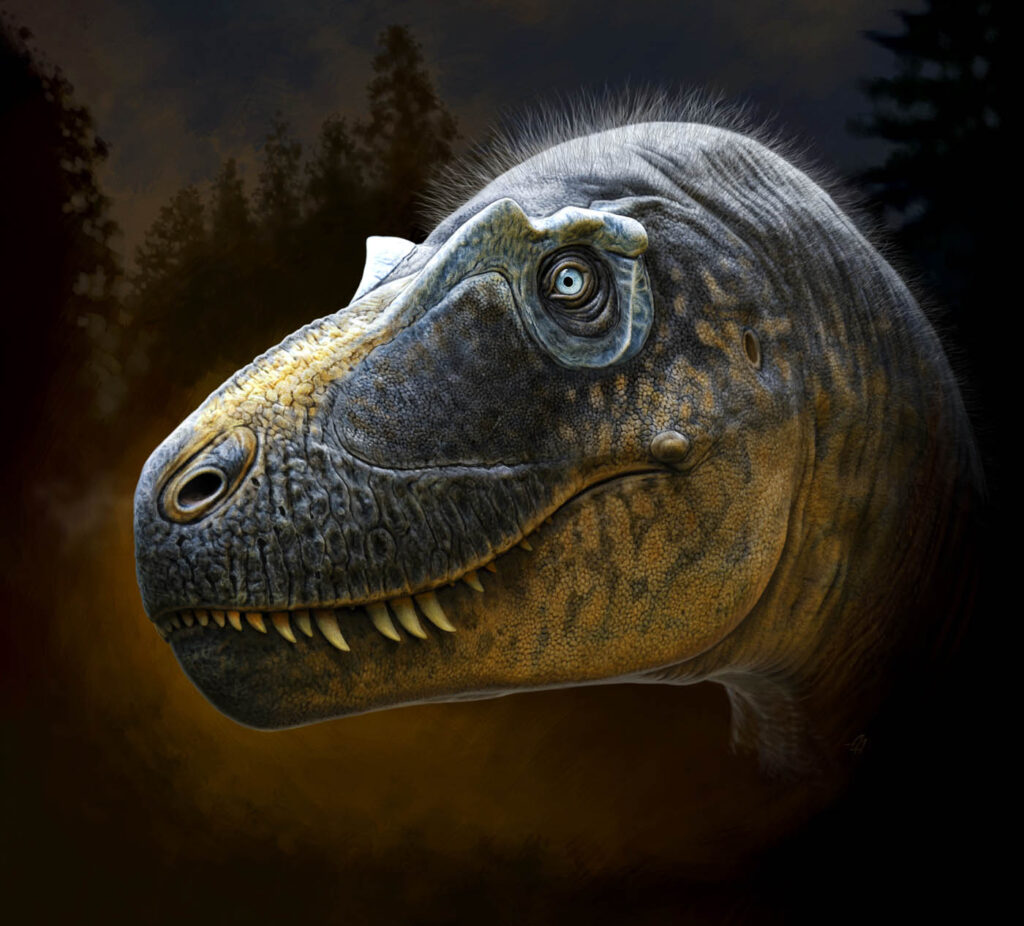 The new species is recognized by the unique arrangement of small hornlets around the eye. Image © Andrey Atuchin & Badlands Dinosaur Museum

Most bones of the skull are represented (some bones shown mirrored here to left side). Image © Elías Warshaw & Denver Fowler. 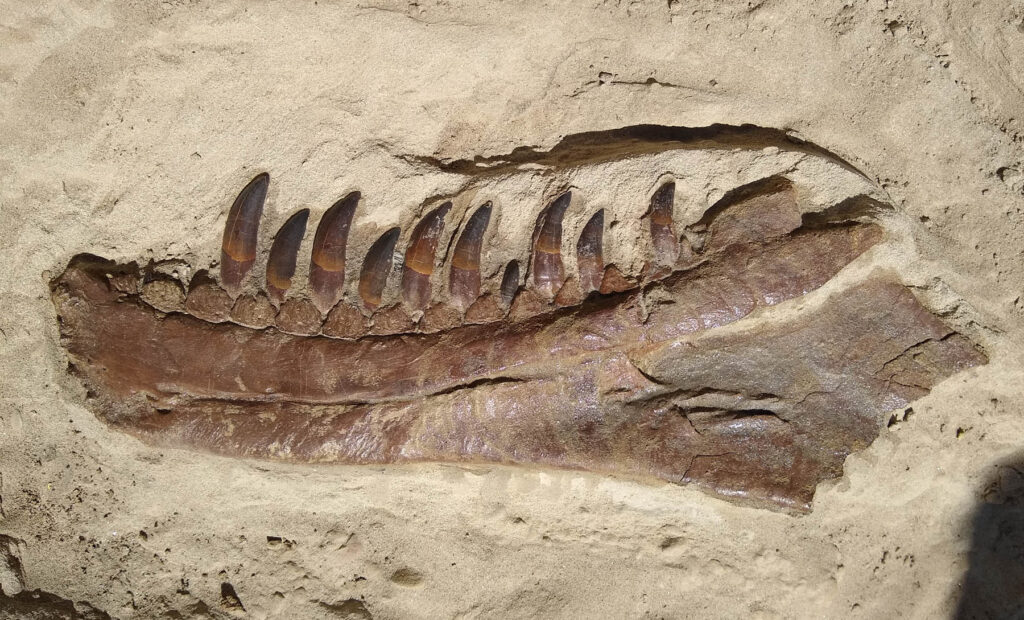 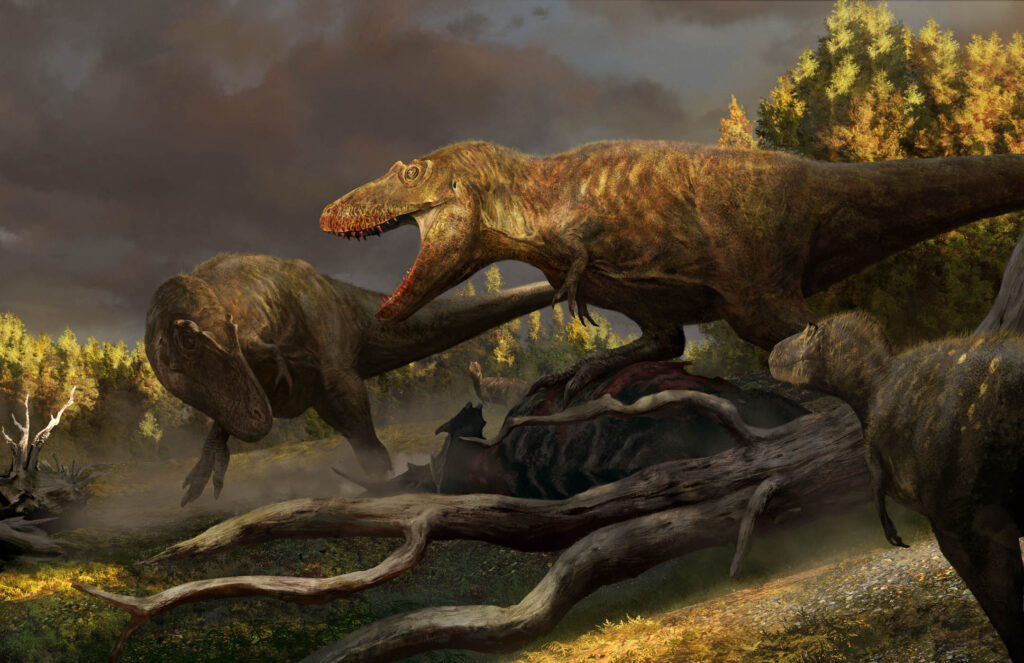 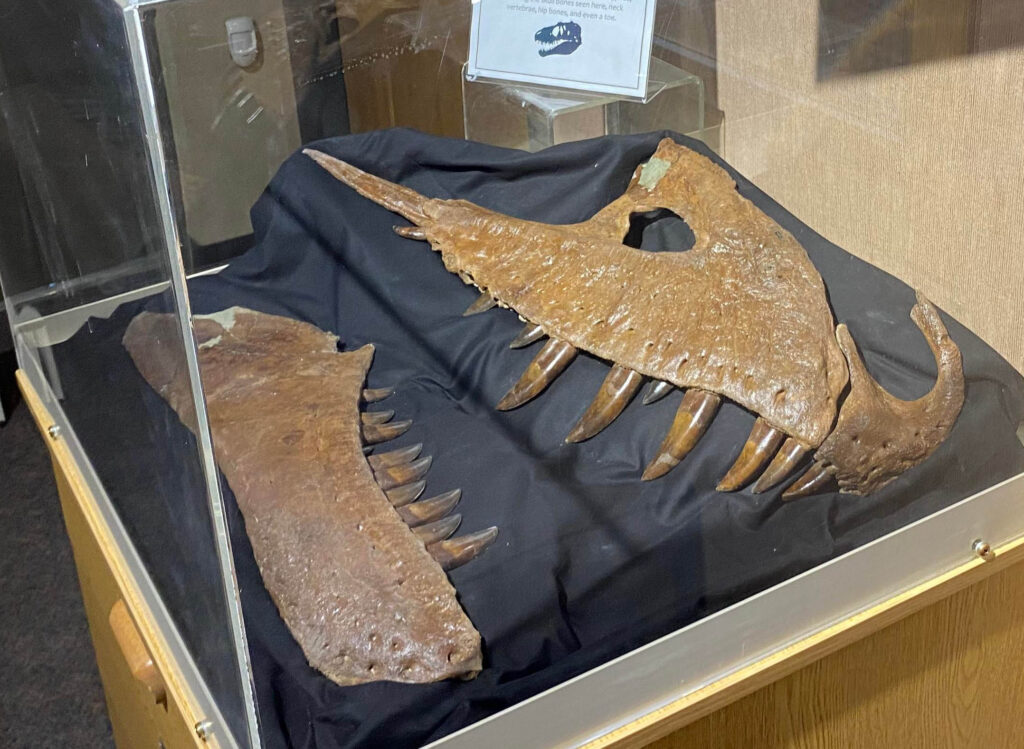 The snout of BDM 107 is on display at Badlands Dinosaur Museum, Dickinson, North Dakota. A full reconstruction of the skull is being prepared. 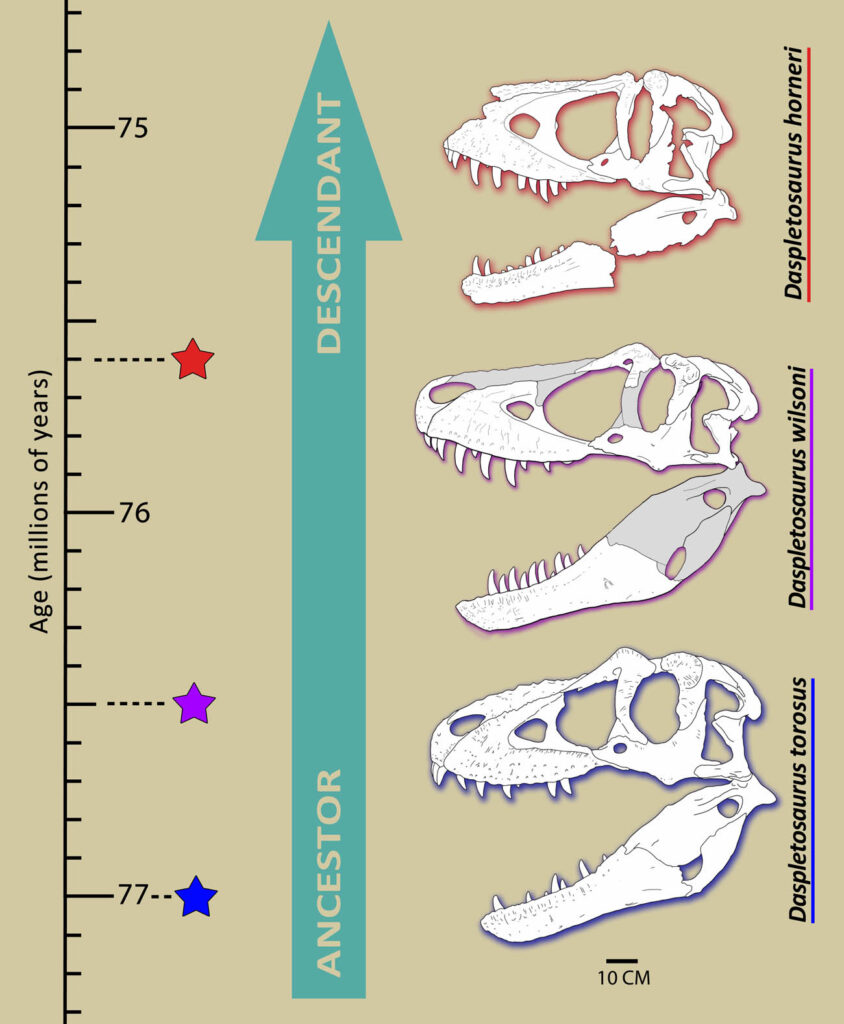 The new species (Daspletosaurus wilsoni, 76.5 Ma) is transitional in form and age between D. torosus (77 Ma) and D. horneri (75.6 Ma). This suggests that Daspletosaurus underwent linear evolution - where one form evolves into the next without splitting or branching. 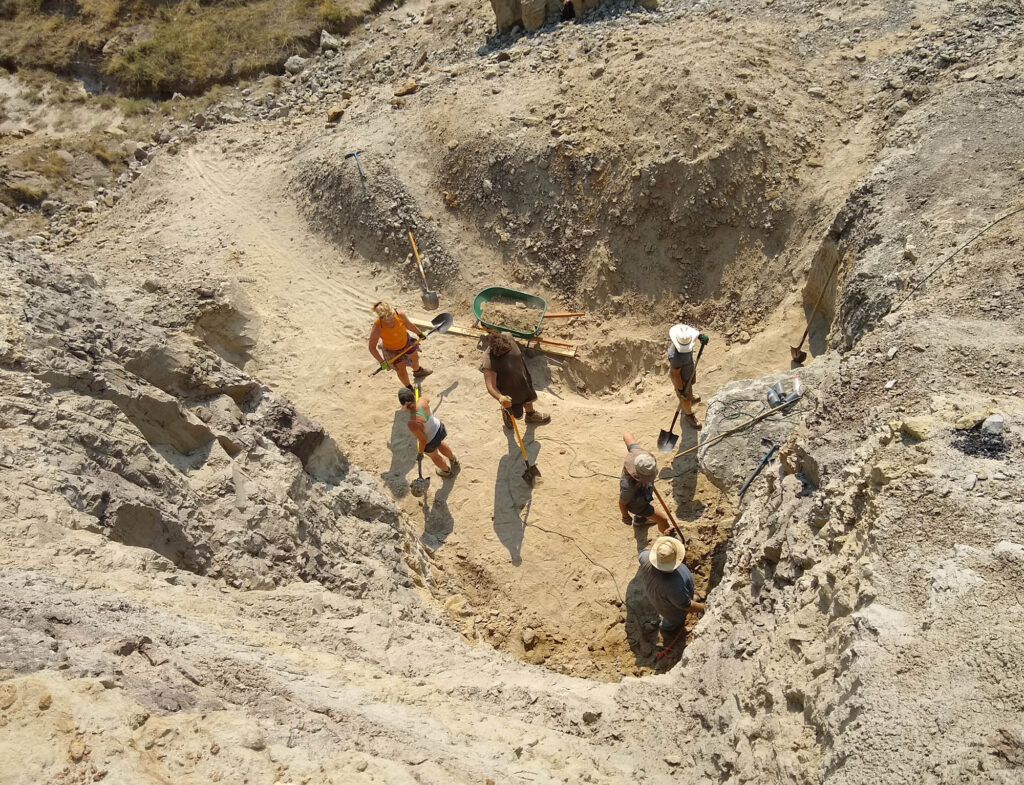 25ft (8m) of rock had to be removed from over the top of the skeleton. 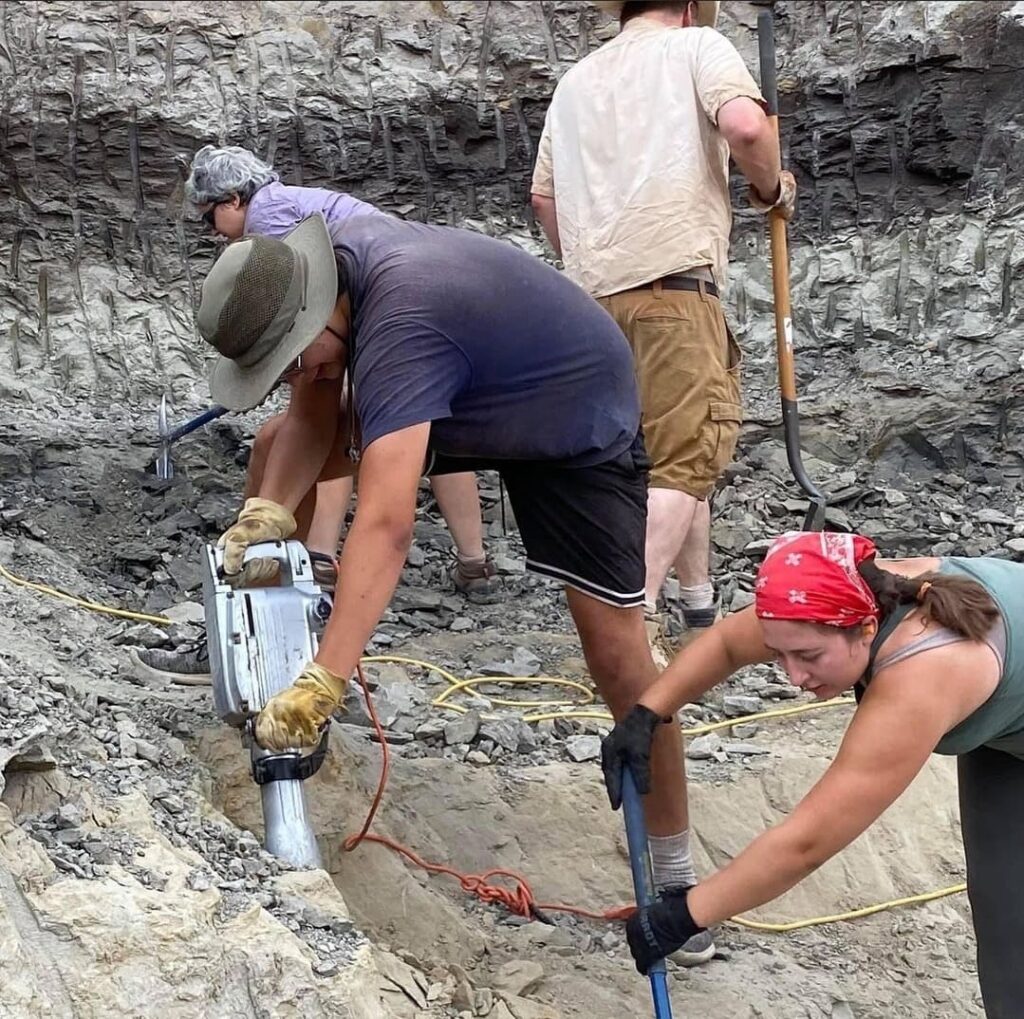 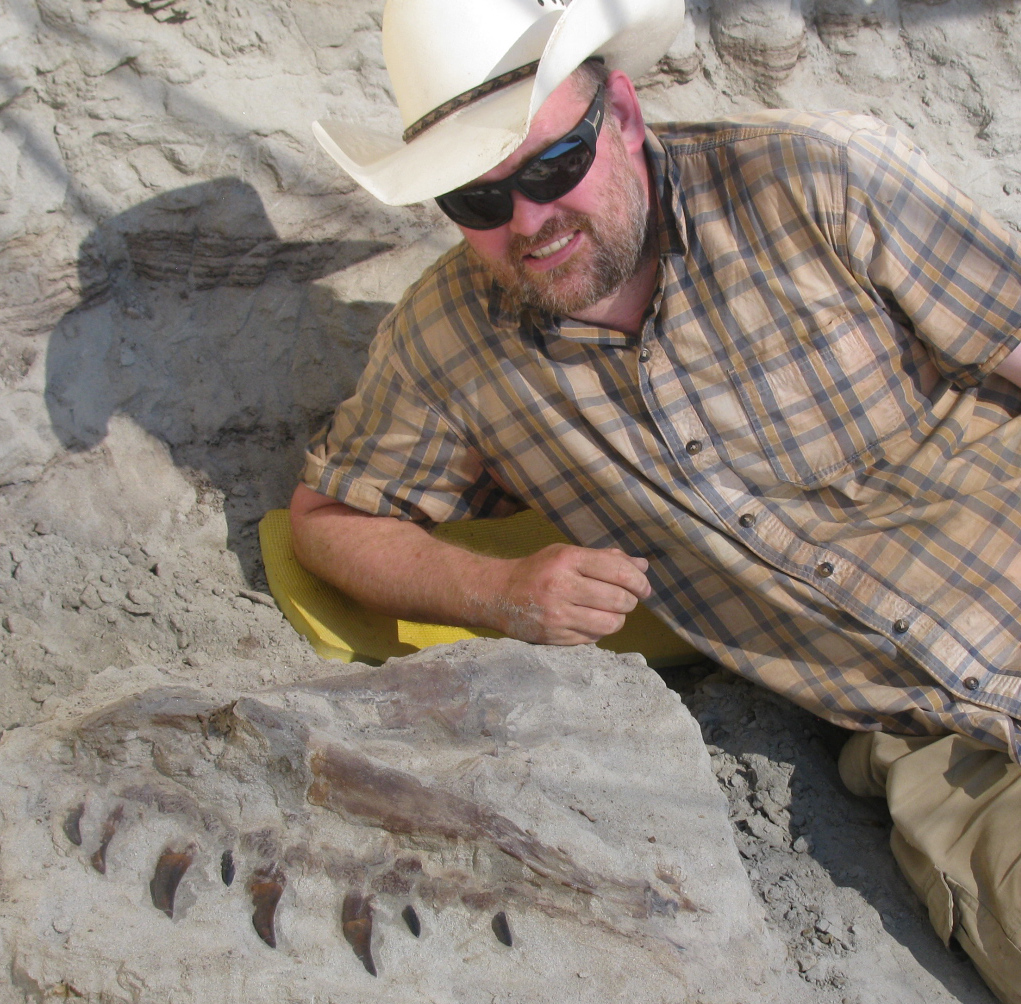 Dr. Denver Fowler poses with the upper jaw as found in the quarry. 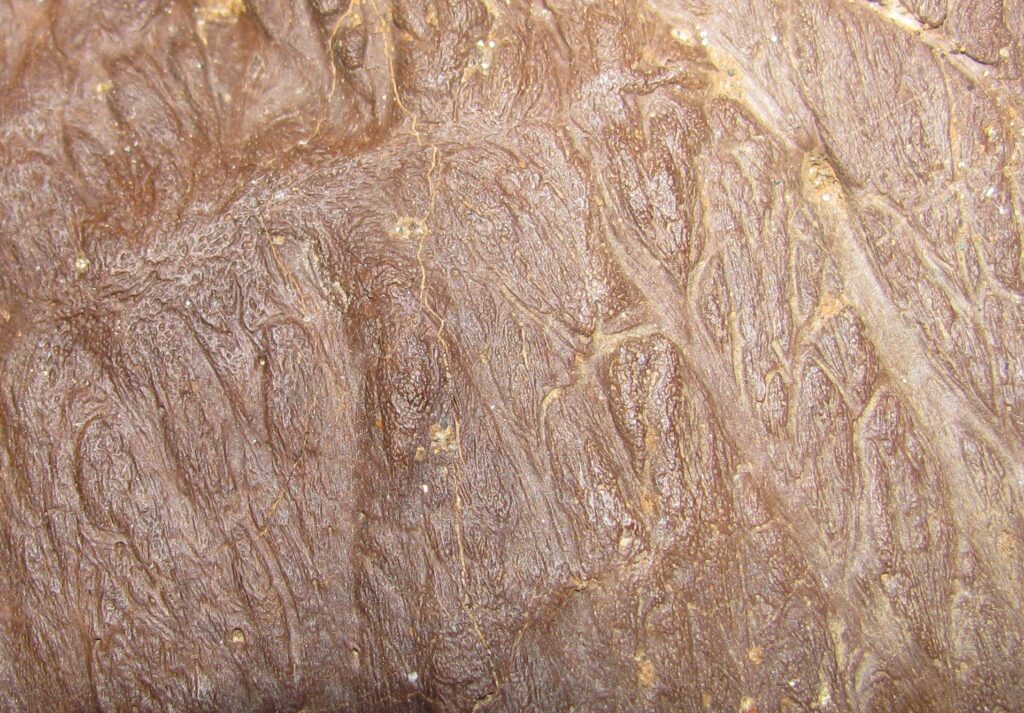 The skull bones are very finely preserved. Here you can see a closeup of the pits and grooves on the side of the upper jaw. These would have housed blood vessels and sensitive nerves. 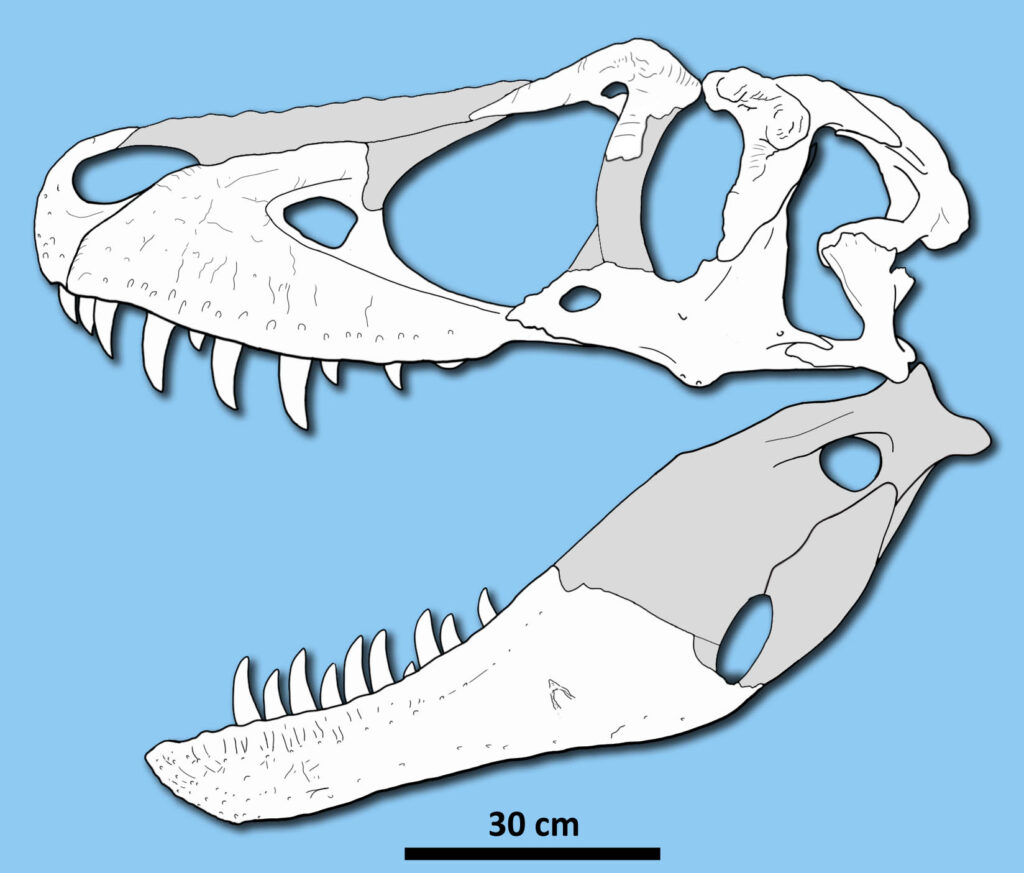 Your ticket for the: Badlands – Research – 2022 new tyrannosaur species